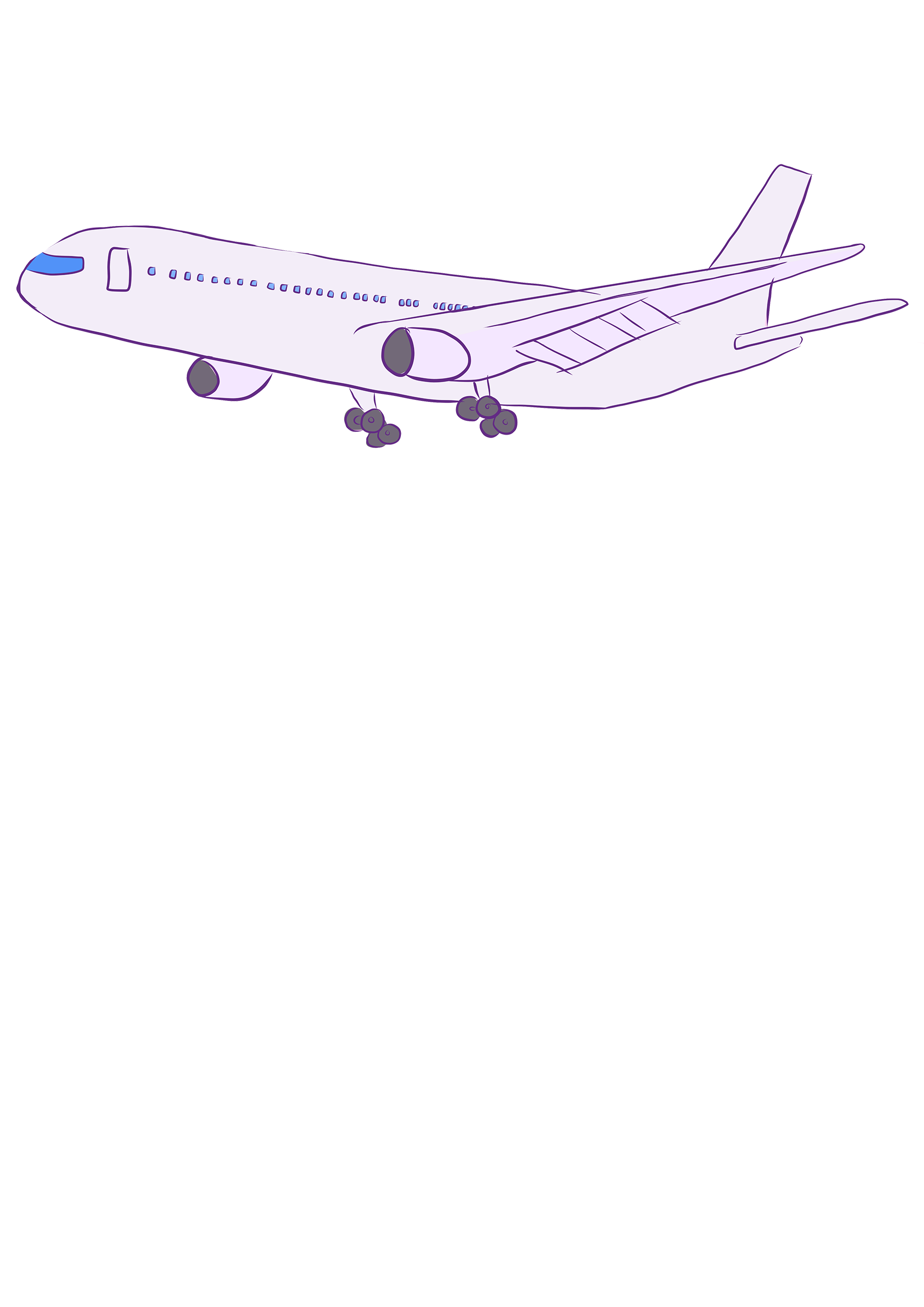 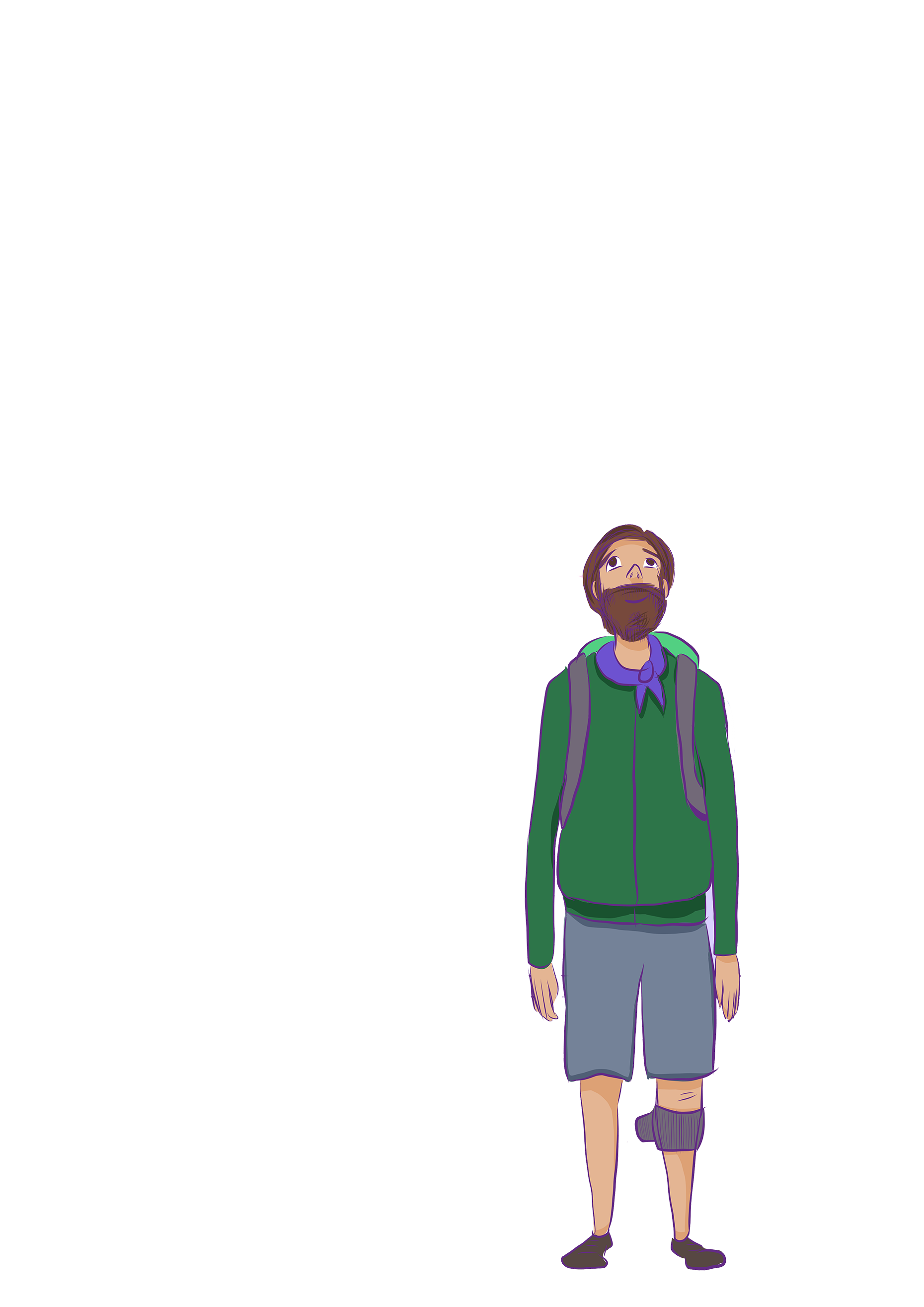 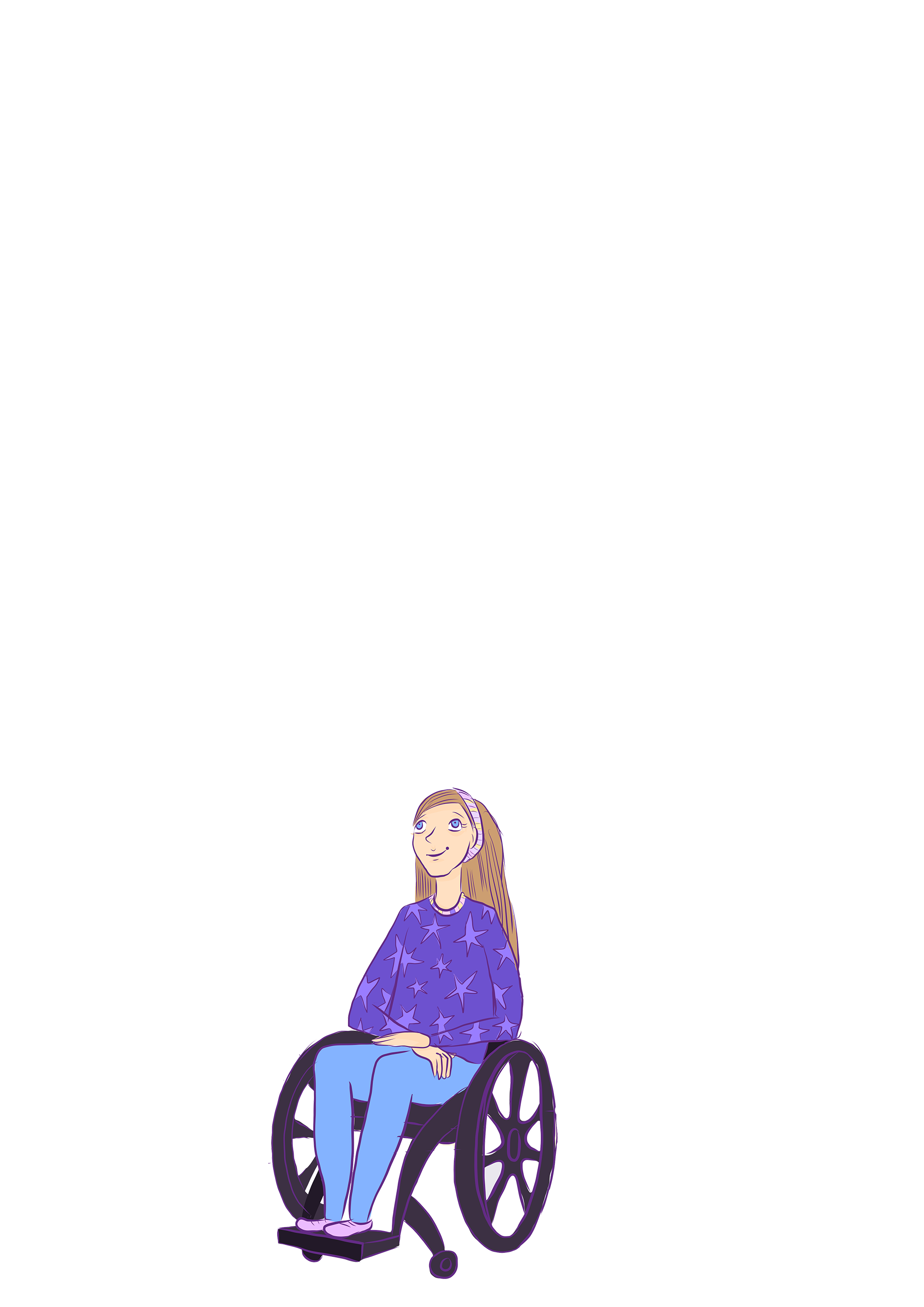 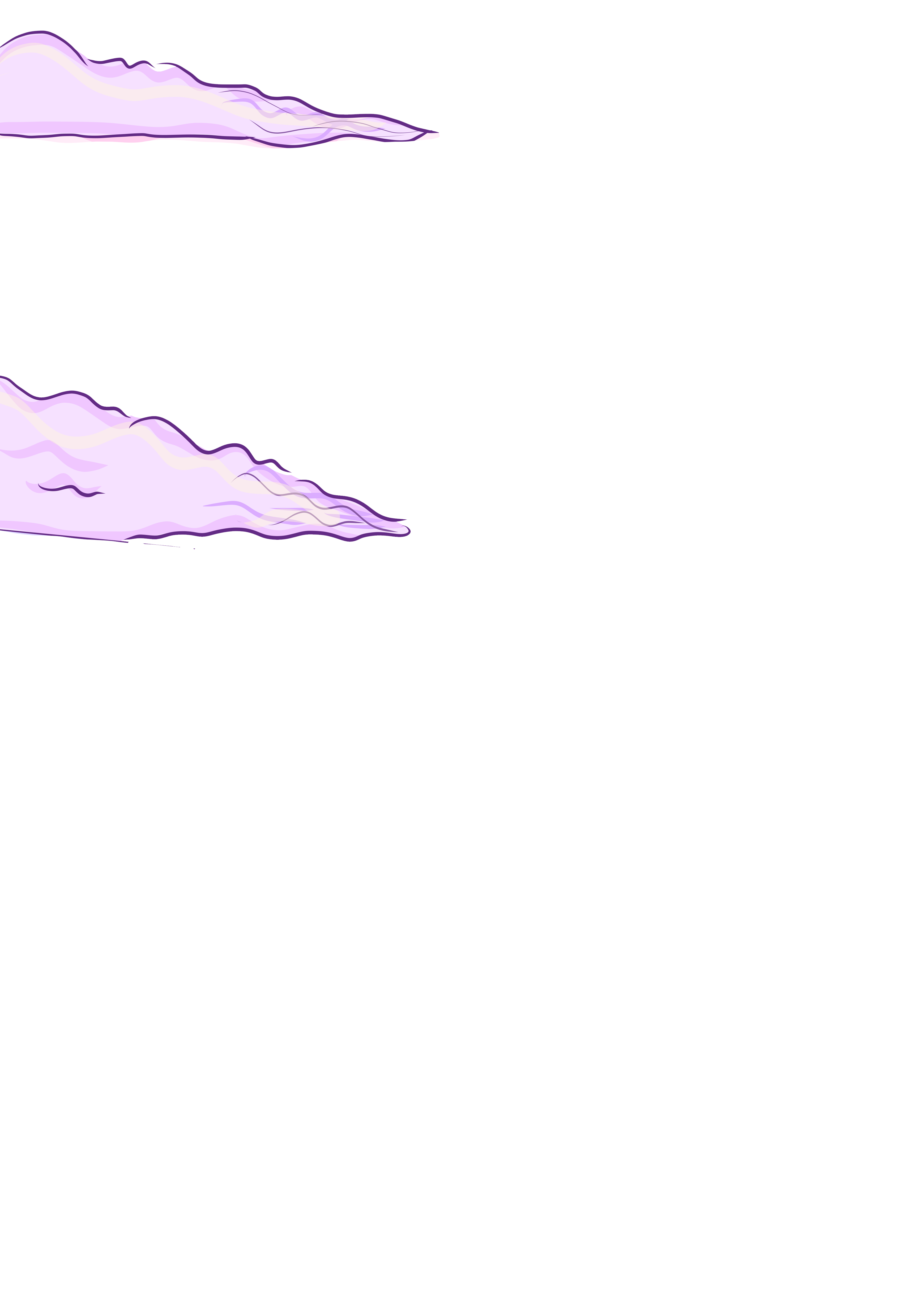 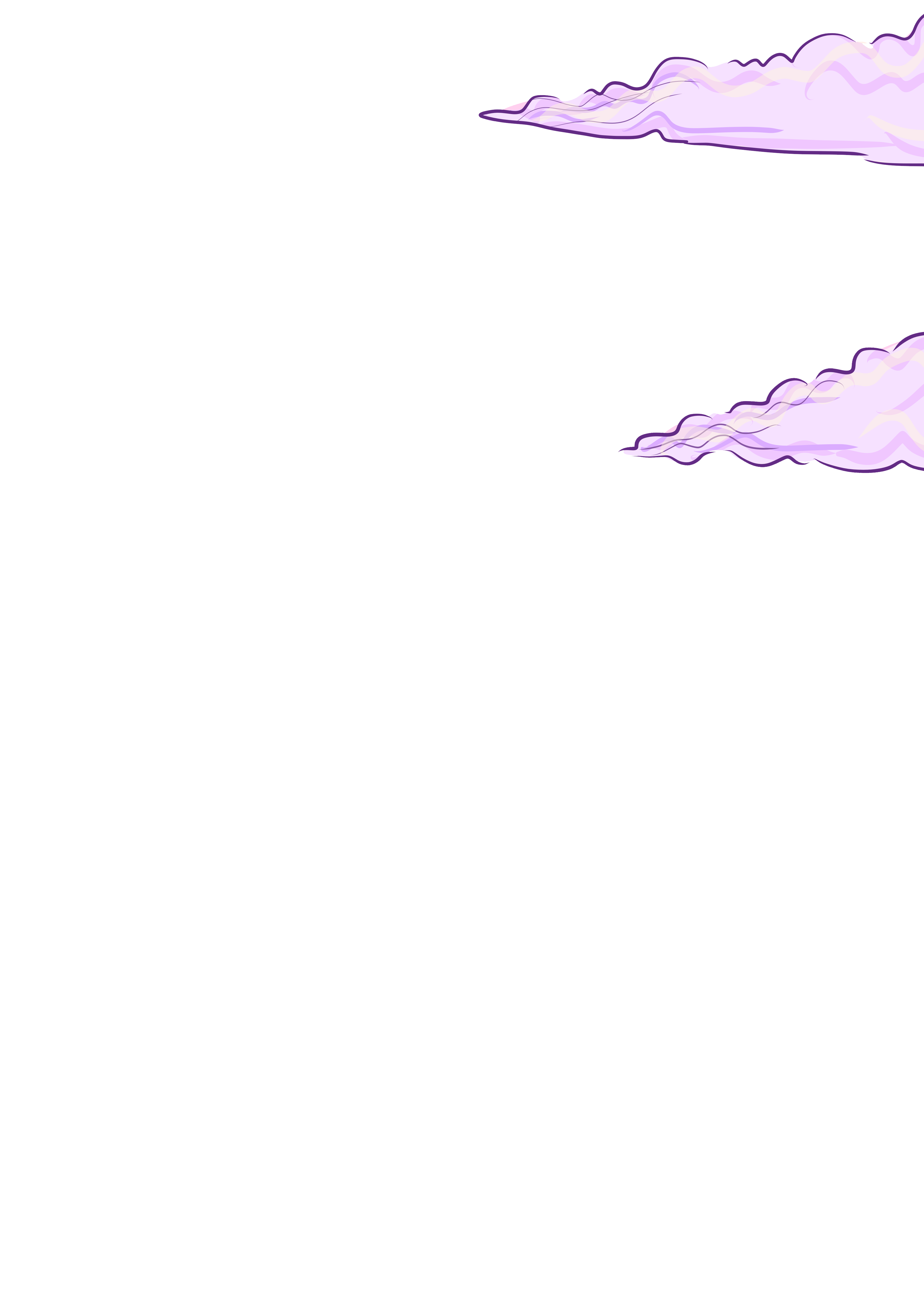 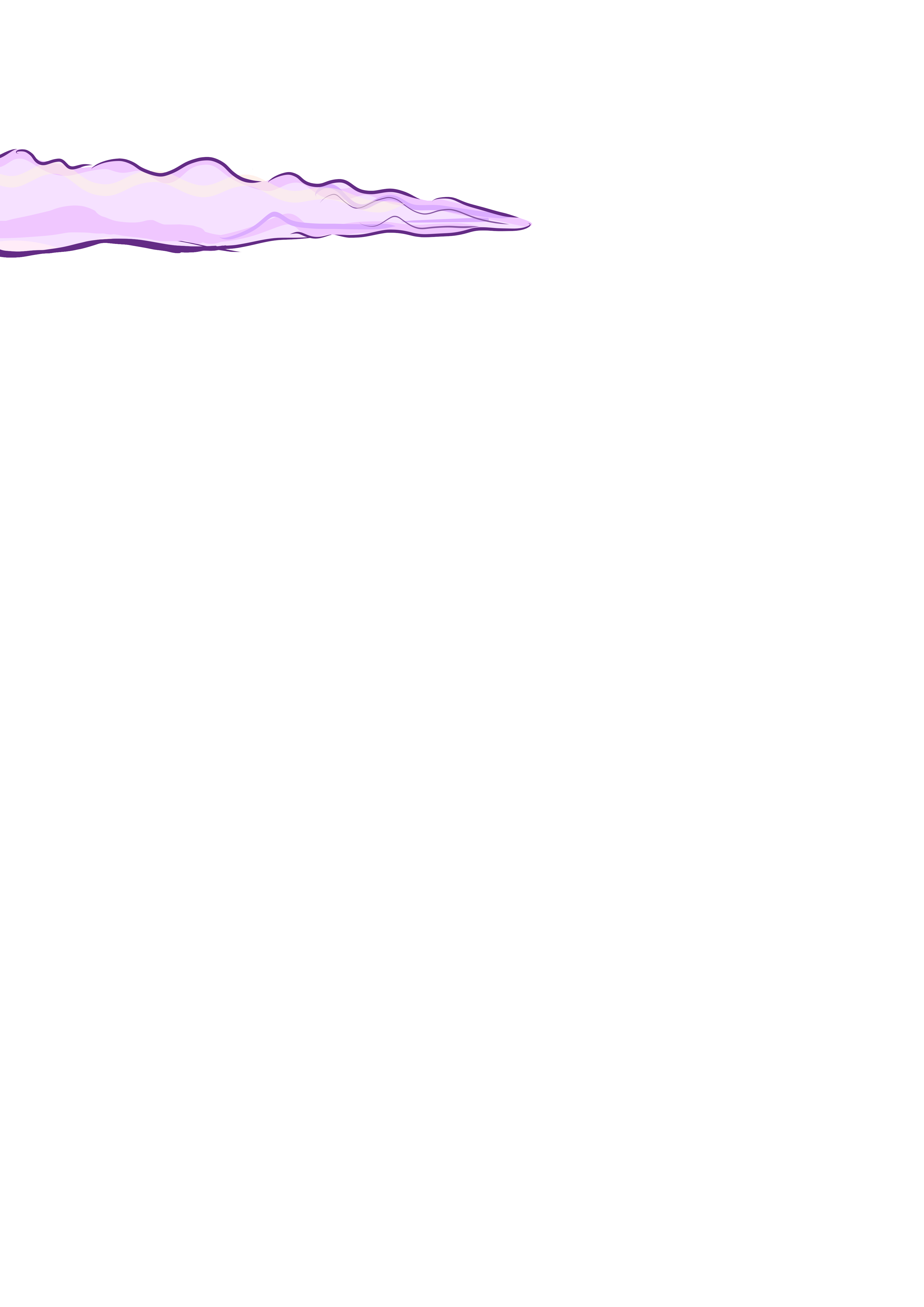 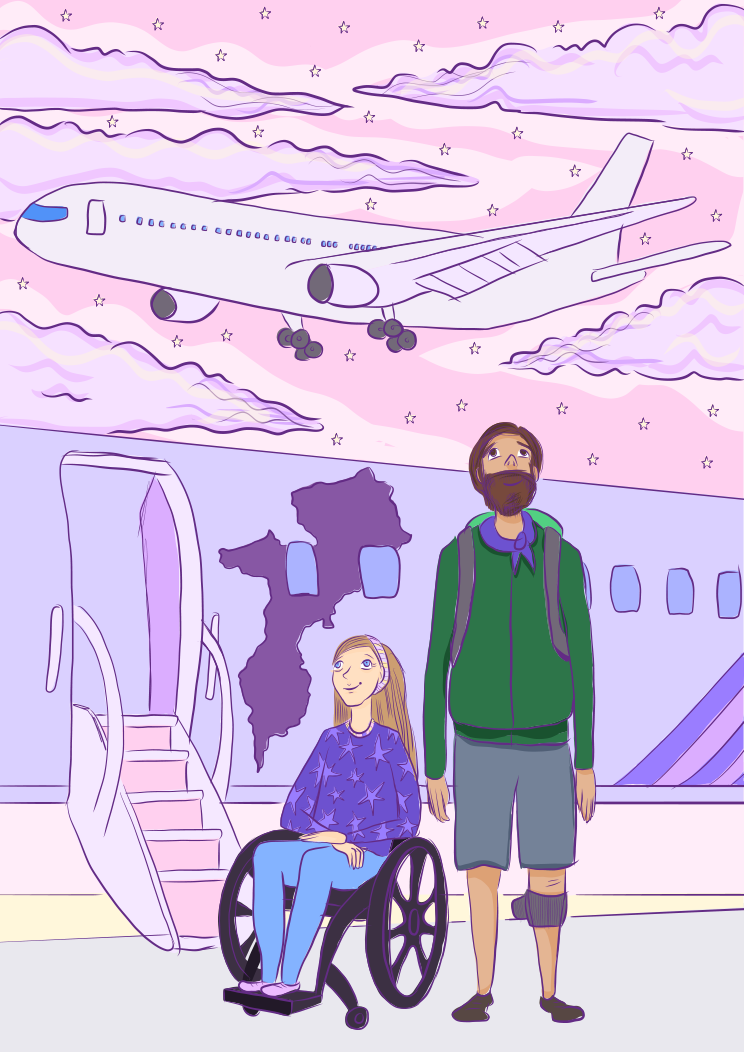 The Velocity of Freefall

The sky is pink tonight. Spotty, with thin, wispy clouds, violet at the edges.

She’s never liked that word. Violet. Too close to violent. Too many consonants, blunt in the air, sharp on her tongue.

Blaire wishes, not for the first time, that she had splurged on inflight Wi-Fi. Her ticket was cheap. Cheaper than she thought it’d be. A benefit of zero-emission flight. It would’ve helped, probably, to have access to the internet, to distract herself from her irrational fear of planes, and clouds, and sitting in a plane suspended midair and surrounded by countless blush-colored clouds. She could’ve spent another five hours on Mozambique’s Wikipedia page. For that matter, she could’ve scoured the thesaurus for something better than violet. Mauve, maybe. Periwinkle. Thistle comes to mind, but if she’s going to describe the troposphere, she may as well lean into the aesthetics of—

“No,” says Blaire, wondering all the while about the etymology of the word nervous.

What does nervous look like, anyway? Does she have a tell? The last thing Blaire wants is for her students to look at her and see—

“I’m not. Nervous.” She would be if the sky were violent. If they were in the mesosphere, with a meteor hurtling toward them, splicing cloud and air. But the sky is pink and clear, and if Blaire shuts an eye, she can just about make out the ground beneath them, the wild froth of the ocean. Why would she be nervous?

A baby screams across the aisle. She doesn’t have to look at Jacen to know that his eyes are creased at the corners.

Jacen blinks with an innocence that would be convincing if she didn’t know him. “Like what?”

More screaming. Someone says something about business class and ginger ale and could someone please let a flight attendant know that one of the passengers is requesting diazepam?

“I’m not analyzing you,” says Jacen. “No more than you’re analyzing me.”

Her ears pop. Or maybe it’s all in her head. Maybe she fell asleep halfway across the Atlantic and they’re nowhere near Mozambique. Maybe she’s so desperate to get off this plane that she’s resorted to dreaming up pressure changes. Or maybe she’s thinking too much.

This is what she gets for watching an embarrassing amount of TV.

Jacen shifts. Crosses his legs. Runs a hand through his hair. He can’t stop moving. Blaire thinks, not for the first time, that if Jacen isn’t careful, he’s going to wear a hole in the floor. At this altitude, they’d hit the water so fast they’d die on impact. Broken neck, probably. No need for a lifeboat.

“Are you nervous?” Blaire asks. Better to keep herself distracted. Better to focus on something that isn’t the plane, or the pressure in her head, or—

The water. How, at terminal velocity, it would barely cushion their fall.

Tabi said it was a bad idea. Months ago, when Blaire applied to the Peace Corps. It was a whim on her part—volunteer, see the world, share the stars with people she wanted to know. A fantasy. A dream. Something that, for the longest time, was better suited for people with working legs. She still feels like pinching herself.

She didn’t expect Jacen to go along with it. It was a joke. One she shouldn’t have made. By the time Blaire realized that maybe she shouldn’t have mentioned going overseas to the man who nearly lost his life in a freak accident, he was looking at her like she was the sun, blinding and fatal.

“It’s a bad idea,” said Tabi, rummaging through the freezer.

“He thought he’d never be able to walk again.” When Tabi emerged with a tub of ice cream, it was with an unmistakable aura of victory. “What could possibly compel him to do that again?”

Blaire thought, but didn’t say, that when it comes right down to it, she and Jacen are the same. Nothing will satisfy them but the world. Even if the world leaves them unconscious on the side of a dirt road, or staring at surgical lights until the room goes dark.

He wasn’t. So Blaire waited. She took him to support groups, watched him fumble through physical therapy reps. She didn’t need to see the EvoWalk to know that it was working. His muscles grew stronger with every passing day. Sometimes she saw the flickering light of the sensors, tracking Jacen’s motions, learning his gait. They shone in the dark like a far-flung star.

Soon he was walking. Running. Unsteady, at first, wobbly on his feet. But he wasn’t unconscious on the side of a road or lying in a coma in a Macedonian hospital, and that—

“Are you sure?” Blaire asked. “I wouldn’t blame you if you didn’t—it’s traumatizing, is what I’m saying. I totally get it if you’re not ready or if you’ve completely reconsidered your choice of career—”

“—and, you know, just because you don’t want to join the Peace Corps again doesn’t mean you can’t teach English or learn about other cultures! Besides, everyone’s saying that Mozambique has plenty of teachers, between Peace Corps volunteers and university grads. And there are plenty of places that could—”

“—use a professor. And consider your resume! You’re a shoo-in, Jacen. And I can teach physics anywhere, so…”

“Blaire,” said Jacen a third time, crouching in front of her. “I want to go.”

It was, all things considered, a miracle.

“Of course I’m nervous.” Jacen shifts again. Curls his fingers in his jeans, so tight his knuckles shine. “I haven’t been out of the country since…”

She dreams about it sometimes. Jacen in the hospital bed, pale beneath the operating lights. He looked fragile, skin drawn tight over sharp, jutting bones. Blaire wanted to touch him but was afraid that, if she wasn’t careful, he might just break.

“To be fair,” says Blaire, “I’ve never been out of the country. Like, ever. So you’ve got a leg up on me, at least.” What is it with her and unseemly jokes? She should really consider a meditative trance. Hypnosis. Something to keep her quiet. “We make quite the pair, don’t we.”

The baby is getting restless. That or there’s something in the air. Blaire forces herself to still, if only to keep her chair from tilting forward, adjusting its center of gravity in accordance with her body.

“It’s okay to be nervous,” Jacen says. He’s still moving. Still tapping his fingers against his kneecaps, like he’ll die if he doesn’t. “You don’t have to pretend. Not with me.”

“I keep thinking about plane crashes.” And violence, and velocity, and synonyms for the color violet. But Blaire is getting ahead of herself. “I know that zero-emission planes are safe and whatnot, which is great, I’m all for eliminating greenhouse gasses—”

Jacen sets his hand on her knee. “Spiraling?”

She laughs. Or tries to laugh. Whatever sound she makes is lost in a flurry of activity at the front of the airplane. “Maybe a little.”

Jacen bumps her shoulder with his. “We’re not going to crash, Blaire.”

“I appreciate the sentiment, but we both know you’re hardly qualified to—”

“Besides, I’m not worried about crashing. I’m worried about drowning. I love this chair, it’s literally the best thing that’s ever happened to me, but not even ultra-lightweight carbon fibers—”

She hums, thinking about velocity again, equations, final position minus initial position divided by time. What she wouldn’t do for inflight Wi-Fi. She should really calculate the drag coefficient, but to do that she’d need to know air density and the size of the reference area and—

“If we crash,” says Jacen, infuriatingly cavalier, “I promise I’ll find you.”

“Dead in the middle of the ocean, you mean.”

“Not if I help you put a life jacket on.” At least he’s stopped wearing holes in the floor. “Think of it this way. The Phoenix AI is so light you’d probably float.”

Blaire would like to believe him. But not even smart wheelchairs can float.

“You can’t just expect me to take your hypotheses at face value. Which is what they are, by the way. Hypotheses. False until proven true.”

“I thought you hated math.”

“I do,” Blaire says, all too aware that Jacen has somehow managed to distract her. So much for a meditative trance. “But my love of astronomy trumps even my dislike of numbers. You can’t shoot for the stars without calculating the distance between them.”

Jacen squeezes her knee. “Tell you what. Once we’re settled in Mozambique, I’ll teach you how to swim. That way, if you ever are in a plane crash, you can swim your way to safety.” She doesn’t need to look at him to hear the smile in his voice. “Private lessons under the stars.”

Blaire thinks that, if their plane crashed in the middle of the ocean, she’d die of dehydration before reaching Africa.

The sky is clear in Mozambique.

What she wouldn’t do for inflight Wi-Fi.

The plane lands, wheels against tarmac. Jacen holds her hand, so tight his knuckles shine. By the time they exit the terminal, Blaire is buzzing—high on adrenaline, or maybe just the relief of making it out alive.

Jacen is halfway to their rental car when Blaire stops. Her palms are sweaty against the rims of her wheels. She can feel her heart pounding, sharp against her eardrums. The sky is clear, but if she squints, she can just make out the faint light of a star.

“I doubt that.” Jacen crouches before her. Rests his hands on her knees, warm and familiar, impossibly alive. “What is it?”

She bites her lip. “Take my shoes off?”

When Blaire sets foot in Mozambique for the first time, it feels curiously like freefall.

Brianna Albers (she/her) is a storyteller living in Minneapolis-St. Paul. In 2016, she founded Monstering, a magazine for disabled women and nonbinary people; in 2017, she co-founded ZRIE, a private new media collective. She consults as a patient ambassador for SMA My Way and writes the column “The Wolf Finally Frees Itself” for SMA News Today. She recently finished the first draft of her space fantasy, #WaxingCrescent, and is in the process of making the book of her heart the best it can be.